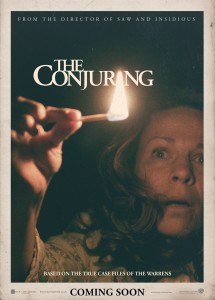 “The Conjuring” is a direct and unapologetic Haunted House film. Regardless of James Wan’s opinion on the actual existence of paranormal activity—it seems that Wan is a curious paranormal agnostic at the very least, or (a cynic would suggest) impersonating that attitude in order to enhance his cinematic craft—he is certainly a believer in the classic horror motifs. I spent a good deal his film feeling like Marty in “Cabin in The Woods,” questioning why its characters consistently made the mistakes that all characters are bound to make in every haunted house.

But these tropes must come from somewhere, and the real Lorraine Warren and Andrea Perron (consultants for Wan) claim that the film is “art” instead of fiction. Regardless of how you respond to their claim, it is this implied veracity that makes the film stand apart from other members of its wood-creaking, wind-blowing, door-thumping niche. Wan gives our demon-hunting protagonists, Ed and Lorraine Warren, a level of intelligence, humanity, and confidence that is functions as the brain and heart of the entire film. And while Patrick Wilson is serviceable, the true center is Vera Farmiga, turning in another performance brimming with a remarkable blend of pathos and cool intelligence. As no stranger to genuine spiritual search,—her own directorial debut “Higher Ground” percolates with metaphysical wrestling—Farmiga’s Lorraine has the remarkable (and underrated) ability to look her husband in the eye and say “I believe that God brought us together for a reason” without sounding trite, sentimental, or shrill. Like a belabored psalmist, she trusts God in spite of her weary, frightened, and frustrated soul.

Ed and Lorraine are human enough to become annoyed with the bureaucracy of the Catholic Church (their priestless, self-initiated exorcism made this protestant feel an embarrassing twinge of theological satisfaction), but sensitive enough to recognize the vastness of evil that lurks beyond humanity’s control. The actual evil shown in The Conjuring amounts to smoke, mirrors, and CGI, but Farmiga’s performance gives testimony to a transcendent pain and suffering. Like Francis McDormand in the Coen’s noir-pastiche Fargo, Farmiga both grounds and elevates all of the ridiculousness surrounding her.

Yet while Farmiga and Wilson are impressive, and while the tormented family is believable as well, the true crux of good horror lies in its formal presentation. Wan is credited as saying: “…the irony has always been that horror may be disregarded by critics, but often they are the best-made movies you’re going to find in terms of craft. You can’t scare people if they see the seams,” and he is right. Classic horror is intensely indebted to cinematic craft, pacing, and what the camera can and can’t see (or chooses not see).

In this regard I am happy to report that The Conjuring has some remarkable shots. Before anything crazy even occurs Wan uses an expositional steadicam shot with the skill and audacity of Martin Scorsese. The slow, intentional zooms he uses throughout the film effortlessly evoke films of the 1970s, when motorized zoom lenses were all the rage; rotating gimbal shots make us feel like spirits floating through out the haunted house. The whole film feels as if it is shot through either a blue-grey or warm orange filter (depending on mood and location), a nice homage to the browns and light-blues that fill out our cultural imagining of the seventies.

However, while it is evident that Wan is a student of Friedkin, De Palma, and other masters of horror, he refuses to immerse himself in their classic cinematic language, settling for pastiche rather than full-on technique adoption. And while I admire his desire to find an original cinematic voice instead of beating a dead horse (oh, but what a beautiful dead horse!), his visual style ends up in a sort of lukewarm deadlock; “The Conjuring” shifts between traditional dollying/steadicamming and the newer “Blair Witch”-style first-person shakeycam. These shifts often accommodate the purpose of individual shots, but they often detract from the pacing and groundwork laid by previous scenes. While this stylistic potpourri isn’t as obnoxious as Abrams’ direction in “Star Trek: Into Darkness,” Wan’s craftsmanship reflects on his generation in a similar way. He can clearly appreciate past styles and pull from them, but he seems to lack the slow, patient energy needed to build a coherent visual language that encompasses an entire film. He bears the DNA of a visionary, perhaps, but certainly lacks the perfection-driven legwork needed to get there.

Regardless, Wan’s sensitive, sincere approach to character and paranormal storytelling elevates The Conjouring into something that leaves you with a beating, compassionate heart long after you’ve exorcized its jolts and chills out of your system. And this summer, that’s saying a lot.

Reposted from the Washington Square News.

I have no spur

To prick the sides of my intent, but only

Vaulting ambition, which o’erleaps itself

And falls on the other.

The first scene of David Fincher’s House of Cards centers on Kevin Spacey suffocating an injured dog on a lamp-lit street, occasionally glancing at the camera with an unflinching, weary, bored expression. “I have no patience for useless things,” he tells us. The dog is dead just before its owners arrive to say goodbye.

Rarely do we see an opening shot that sets a tone so jarringly. Throughout the first episode of “House of Cards,” the combination of Spacey and David Fincher feels like a one-two punch to the gut, and yet, paradoxically, an attack that is so quietly, manically unsettling that it’s almost more like a slow, steady hand compressing your windpipe. From “Breaking Bad” to “Mad Men” to “The Wire,” quality television of the 21st century is chock full of immorality, cynicism, and antiheroes. Yet in “House of Cards,” Fincher deals from a deck that is so unabashedly nihilistic, with such a smugly negative view of human nature, it seems as if he and Spacey are mocking any desire we have to find goodness, sympathy, or honor in its characters or the political games they play. Spacey’s Francis Underwood seems like the Machiavellian lovechild of “The Wire’s” Stringer Bell and the taunting murderer of Fincher’s “Se7en.”

“Forward! That is the battle cry,” says Underwood in one of his many southern-drawl-smothered monologues. “Leave ideology to the armchair generals. It does me no good.” Fincher shares Underwood’s disinterest in lofty ideology. His Darwinian monsters don’t have time for ethics or moral principles.

The plot is all vaulting ambition, desire, backstabbing, manipulation, and revenge. Underwood is the ruthless Majority Whip congressman who helped Garrett Walker secure his upcoming presidency. He was promised a Secretary of State appointment in return for his labor, a promise that the President Elect decided to forego. Unfortunately for the president’s poor staffers, they have no conception of the hell they have unleashed upon themselves. I mean, Underwood suffocates injured dogs on the street — Garrett doesn’t have a chance. With a false pledge of continued loyalty to the administration, the help of a spry muckraking journalist (Kate Mara), and prodding of his icy Lady Macbeth, Claire (Robin Wright), Underwood spends most of the episode preparing to enact his vengeance.

“Macbeth” is an appropriate comparison for this show, as Shakespearean style is continually invoked by writer Beau Willimon. He features monologues more jarring and indulgently wordy than anything seen on modern television. Robin Wright, while delivering an understated performance, invokes Lady Macbeth to such an archetypical degree that I could never respond to Claire as anything beyond a literary pastiche. Invoking The Bard (not only in plot, like “Ten Things I Hate About You” or “She’s The Man,” but in style) is an incredibly risky move. In plays like “Macbeth” and “Julius Caesar,” Shakespeare took the narrative structure of a political thriller and used his linguistic ability to deliver satisfying platters of philosophical conundrums, ethical questions, and profound characterizations. He turned the seedy genres into lyrical poems. “House of Cards” aims for similar lyrical profundity, but Willimon’s writing is often more cringe-worthy and self-congratulatory than truly enlightened. While Spacey — an actor well acquainted with The Bard –– can occasionally make Willimon’s lines pop with brilliance, asides like, “I love that woman. I love her more than sharks love blood,” fall flat. Underwood’s conspiratorial initiation with his wife, “We’ll have a lot of nights like this, making plans, very little sleep,” is almost laughably forthright. Other lines work to greater degrees, but the result is decidedly mixed.

Therefore, beyond Spacey, the unsung hero of the “House of Cards” pilot, the force that keeps it from falling into melodramatic disrepair, is David Fincher. Perhaps the most talented auteur to delve into nihilism and the anxieties of the information age, Fincher’s tight direction is at the top of its form. The warm oranges of D.C. streetlamps and the smooth of crispness of his digital filmmaking masks and mocks “House’s” internally decrepit characters. His pacing is as involving and meticulous as “The Social Network.” In many ways “House of Cards” feels like a philosophical companion piece to that film, albeit without the strength of an Aaron Sorkin screenplay.

And as we know from “The West Wing,” Sorkin’s view of government is far too idealistic for this show. Political dramas make interesting television (and film, as Tony Kushner demonstrated so brilliantly with “Lincoln”) because, whereas most televisual art trades in id-driven bloodbaths, the political realm is a fascinating sight of convergence for principle and ambition, idealism and opportunism, altruism and ruthless strategy. “The West Wing” and “Parks and Recreation” are two of my favorite television shows for this very reason.

Without the brutal strength of Spacey and Fincher––who both have the uncanny ability to make narcissistic cruelty vehement and sexy––the “House of Cards” pilot may have been a disappointingly one-dimensional, plainly written portrait of government corruption. Therefore, as the series progresses and Fincher relinquishes his directorial reins, it will be interesting to see whether “House of Cards” will truly build into something nuanced and fascinating (it certainly has potential), or whether the whole deck will crumble before our eyes.