In this series, “Surface Questions,” I will address questions related to my forthcoming memoir about media, SURFACE TENSIONS, which will be released on July 1st. To submit a question, comment or email me at nathanroberts@g.harvard.edu; I will draw the name of one question-submitter, who will  then receive a free copy of the book.

Surface Question 2: When writing this book was there any one author whose works influenced you the most? Also, what are the odds of a lolcat translation of your book being released? 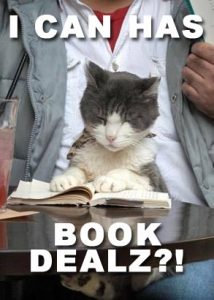 I’ll tackle the second question first: The lolcat translation is being polished as we speak. The finest translators in the land are squinting through their monocles, smoking their corn cob pipes, and scrupulously parsing page after page of fine-grained papyrus. It’s long, thankless labor, but somebody has to do it.

Now to the first question: the short answer is “no,” but that’s too easy. I suppose that the author who
really inspired this whole shebang, the first to make me want to write about technology and media and selfhood in the first place, was Zadie Smith. I was a second-semester freshman when I read her essay “Generation Why?” in a large, silent Bobst Library reading room, for my Intro to Fiction and Poetry class. I credit this piece with single-handedly turning my attention from criticism to essay. It begins as a review of The Social Network – and it’s a damn fine review, I must add: Smith describes how “muscles seem outlined by a fine pen” and how “water splashes up in individual droplets as if painted by Caravaggio” – before morphing into a broader critique of Facebook, what it’s doing to selfhood, what it’s doing to my generation. What starts as the critique of a specific film blossoms into full-blown cultural critique, grounded in philosophy and literature. But its not just transformation that makes the essay work: ideas weave their way throughout the entire piece like musical motifs. I thought it was magnificent. It is magnificent.

But I instantly knew that it wasn’t sufficient. It introduced the provocative and definitely-true idea that the technological systems we live within form our sense of what a self can be, what a self should be, and therefore shape and even denude ourselves in critical ways. But, as I wrote in my final essay for that writing class in early 2012, “more often than ever before, I see people trying to break through Facebook’s interface in order to start meaningful, nuanced, and thought-provoking discussions… More often than ever, I see people using Facebook to link to interfaces where being ‘liked’ isn’t the epitome of online existence.” I brought up a point that I heard Alissa Wilkinson – who ended up writing the foreword for Surface Tensions – make about idols and icons. I paraphrased:

…People can choose to use Facebook to link to substance and make connections that actually matter. The possibility for devolution and mindlessness will always be available, but society can always have the potential to­­ – like Zadie Smith – see the shallowness of these sort of “connections” and consciously choose to transcend Mark Zuckerberg’s algorithms. Online, with cleverness and popular preferences, it is possible for me to be my own Final Club president; I can be readily liked. As the programmers in The Social Network suggest, there is an “algorithm” for that. But is that really the sort of person I want to choose to be? Can’t I choose to link to something greater?

The prose looks only okay to me now, formally speaking. (I took a class with Zadie Smith a couple years later. She helped my writing improve significantly.) But this essay is definitely Surface Tensions 1.0. My basic argument (this isn’t a spoiler; I make this point in the Introduction) is all here: modern media can diminish myself, can “curve myself inward,” as Martin Luther would put it, but it can also form a bridge, an intervening substance, between myself and things beyond it, things that matter. The rest of Surface Tensions is a Memory Lab in which I test the contextual viability of this theory. It looks at occasions when meaningful linking did or didn’t occur in my life, though a variety of mediums. It brings this idea down to earth.

To be concluded tomorrow…