My most recent Writing About Film assignment was to write a “book review” of sorts. Specifically, the piece was supposed to be an essay loosely inspired by a book about film. Naturally, beacuse I’m a bonehead, I chose to write about a book chock full of difficult philosophy. While you may have to stick with me a bit on this one, I think this is a piece worth sharing simply because it’s about my plan of study at NYU. People ask me what I’m studying and I tell them that I’m in an individualized study program. They frown. I explain that I’m studying “The Philosophy and Psychology of Film.” They seem intrigued but don’t quite know what I’m talking about. To be honest, neither do I–– exactly. But this piece touches on some of the ideas that fascinate me, ideas that inspire me to get up for class in the morning, ideas that I sincerely believe manifest themselves and resonate in all of our lives. Ideas worth investing in.

Plus, you’ll get a taste of why I don’t like The Matrix and why I’m a sincere fan of Cloud Atlas. I think (particularly after more people see Cloud Atlas. Like you. Today.) my position will be unusual and unpopular. Come at me, bro.

With sincere apology to Slavoj Žižek for the numerous ways I’ve probably misrepresented his work, here we go: 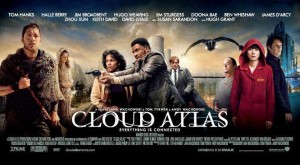 One afternoon this past summer, as I was sitting on the porch of a mountain cabin with my father, we began to discuss postmodernism and the role of the academic “provocateur.” As an example of this sort of figure I referenced Slavoj Žižek, one of the philosophers I had to try to wrap my head around as a NYU Gallatin freshman.  My dad—Harvard educated, BA and PhD—half-listened to my muddled attempt to explain Žižek’s style before shrugging: “If someone wants to call himself a provocateur, I’d be more inclined to call him an asshole.”

To be honest, I’m not sure. And I don’t think philosophers like Jean Baudrillard or Slavoj Žižek are sure either. But I do believe that if taken seriously, postmodernism is the academic equivalent of a waving white flag in surrender, not a having a self-satisfied jerkoff session. In fact, the term “academic provocation” implies skirting the edge of ideas bigger than us, poking something far vaster than the limits of our own consciousness. And, once we get past the head-trips, I think this sort of provocation leaves us somewhere surprising and exciting: it leaves us longing to engage with art and see the world anew.

Žižek’s provocation fills the pages of his 2002 book Welcome to The Desert of the Real! Its five essays form a broad tapestry of thoughts on how the bombardment of media simulations has made it impossible to conceive of reality unmediated by images.  Writing in the wake of 9/11, the destruction of the Twin Towers is his primary example of an important paradox: trying to evoke “`the Real’ [through fantastic violence]… culminates in its exact opposite, in a theatrical spectacle” (9). While the destruction of the towers was meant to shock Americans out of self-sustaining fantasy with the reality of painful violence, most watched the event as a simulation mediated through a television screen. It appeared to America like an extremely compelling disaster movie, horrible and amazing at the same time. The mediation of a machine, a television, turned a really horrible event into something virtual and cinematic.

So how do we experience unsimulated reality? Is there a way out? Žižek doesn’t know. The title of his book, and how he uses it, says as much. “Welcome to the desert of the real!” is a line by Morpheus in the Wachowskis’ 1999 hit, The Matrix, and a reference to Jean Baudrillard’s Simulacra and Simulation (which Neo uses to hide an illegal disk in the film). Morpheus says the line to Neo when showing him that the world he’s come to know, the prosperous world of the late 1990s, is actually a virtual illusion created by machines. The real world is a spectacular post-apocalyptic city.

Yet Žižek points out that this post-apocalyptic “reality” isn’t actually real at all; it appears to Neo and viewers as a theatrical spectacle. The scene itself is literally made with computer animation, mediated by a complex machine. To Žižek, this irony represents how there’s no conceivable way out of virtual reality. Even “The Desert of the Real” is a spectacular virtual conception.

Personally, I find Žižek’s critique of The Matrix only one example of what makes the film unsatisfactory. If the film is, as Žižek assumes, a prime example of postmodern media (the whole cast was required to read Simulacra and Simulation), it makes postmodernism look incredibly vapid and self-serious. The world inside The Matrix isn’t so bad. Sure, it’s tinted green a little bit and Neo doesn’t look very happy, but isn’t that Keanu Reeves on a good day? There’s no inclination that people can’t have meaningful relationships inside the world of the machines. Agent Smith even says that keeping people happy makes them act as better energy sources. People aren’t actually slaves or subservient in any obvious way. And outside of The Matrix clothes seem to be made of burlap and food sucks and everything sucks.

Only the concept of being duped for your entire life, the “twist” of being fooled, makes the premise of The Matrix interesting. It isn’t grounded in the reality of physical persecution or the actual denaturing of reality through mechanized images; it is an action film based solely in abstraction. When Neo dramatically tells the machines that: “I’m going to show them a world without you. A world without rules and controls, without borders or boundaries. A world where anything is possible,” I thought: What is he talking about? He’s just going to show them a world without comfortable clothing. Machines don’t actually seem to denature much in The Matrix. The Wachowskis actually make virtual reality seem pretty damn awesome, especially if you’re “The One.”

My weariness of the Wachowskis’ work helped me try to rein in my excitement about Cloud Atlas when I first saw it. But since it was adapted from a well-regarded literary source I was vaguely hopeful that maybe this time their intellectual cleverness wouldn’t overshadow the film’s emotional substance. Maybe this time they wouldn’t show off their complex philosophy only to underrepresent it. But I was a bit wary; in a film full of six story lines in six different times, would the human element be any stronger than it was in The Matrix?

I was happily surprised by how much I liked the Cloud Atlas; I have seen it twice now. While there was a fair amount of didacticism and philosophizing (including humble questions and varying perspectives, though!) filling its edges and its characters’ speeches, Cloud Atlas was most successful when did what The Matrix refused to do: it let its philosophy stay implicit.

Every film, even the most mind-numbing comedy, is implicitly philosophical. Every script and every decision in a film promotes a specific narrative worldview. If your protagonist is miserable until he begins to help others, a la Groundhog Day, then your film implies that helping others is the best thing you can do with your life. If doing good only ends up making you miserable, a la Chinatown, then your film implies a nihilistic worldview where nothing can give you lasting happiness. You don’t need Baudrillard, science fiction, and endless exposition in order to have a philosophically complex film.

Cloud Atlas has a philosophical conception of how the world functions, of the Darwinian “status quo” that transcends eras, of enslavement and resistance, of kindness and sacrifice rippling through time. But at its best moments it makes you come understand to these grandiose understandings yourself. You have to wrestle with the stories to make connections and see why they even belong in the same film. In fact, it is the narrative worldview that ties these otherwise unrelated stories together at all (beyond a few multi-storyline characters and surviving books). This is a heady process, but unlike The Matrix, there are human stakes involved this time. I found watching the film to be an exciting and engaging task, even more on my second viewing. Seeing the film is more like figuring out how you’re similar to your parents and your grandparents than figuring out why humans work as a good mechanical battery.

And at the film’s most pleasurable moments, juxtapositions between the six different storylines lend meaning and nuance to each other. There is a joy that comes from witnessing the same motif creatively applied to different genres. Within the span of a few minutes we see a Korean clone escape enslavement on a Tron-esque motorcycle in 2144, British senior citizens flee a Cuckoo’s Nest-inspired nursing home in 2012, and a tribal burlap-garbed Tom Hanks (again, the burlap!) run from a Hugh-Grant-cannibal in post-apocalyptic woodlands. Cross-cutting and parallel motivations lend pathos to all three storylines. This concept of meaning created by juxtaposing clips was coined the “Kuleshov Effect” in the 1920s (distinct and unrelated shots drew emotional reactions when assembled together cinematically, transcending their original diegetic purposes) and became the foundation of Soviet montage, but it has been largely ignored in conventional American narrative cinema. Cloud Atlas merges montage-tactics and narrative momentum at a level of formal complexity that is both daunting and thrilling. Unlike The Matrix, a film that forces the viewer to buy a premise based on meager intellectual conceits, Cloud Atlas allows viewers to find meaning within the madness and it has the formal intelligence to help them along the way. It provokes rather than preaches.

Finally, in very important ways, Cloud Atlas provides a possible answer to Žižek’s concern about media denaturing reality. In some ways the film is very postmodern, relying on familiar tropes thrown in a blender. It is pastiche upon pastiche. However, the juxtaposition of these stories, the merging of their themes, and the opportunities for an individual viewer to make connections takes full advantage of the cinema’s power to create meaning. It doesn’t simply turn physical reality into virtual reality. No, Cloud Atlas takes the elements of pop culture, the elements of pre-existing virtual realities, and puts them together to create new realities, to find new connections, to reshape the nature of individual “tropes” and “clichés.” If we can’t escape desert of virtual simulations we live in, the Wachowski’s newest film gives us hope that we can boldly innovate inside the system. We can challenge our narrative preconceptions, our minds and our worldviews. And there’s no theatrical effect to diminish that humble, exciting process. It’s unsimulated reality.