I am currently riding on a train up to Oxford. This alone is a treat; riding a train through the British countryside is romanticized for good reasons. Even in the early fall, trees are still a wonderful mix of green and yellow. The houses are as red brick as your heart could desire, the grassy lawns are rich and emerald, the rivers brown yet clear.

Thames from the Tate Modern

London has been a wonderful contrast to both Granada and Prague. It is a simple gift to be in a city so westernized yet a city with such strong particularities and cultural character. It many ways, as far as diversity of individuals and eateries are concerned, it feels like a sister city to New York. And yet, London feels cleaner, classier and more modern than New York, and certainly more vastly spread out. The distance between places can make London a little overwhelming, but also lends its neighborhoods a great deal of individual character and diversity. Unlike New York, it feels wholly lived in, and, if you’re a fan of classic red brick like myself, this is immensely comforting. Last night I visited “Ye Old Cheshire Cheese,” a pub that Charles Dickens apparently went to. Sitting on an ornate blue velvet couch in a burgundy room warmly lit by small wall-mounted lamps and a large (unlit, unfortunately) fireplace, drinking a classic bitter English pint, looking at ancient portraits and pictures on the walls,

I didn’t feel the weight of formality and precociousness that often leaves me disenchanted with stereotypically British things. Rather, I felt a reassuring sense of home. 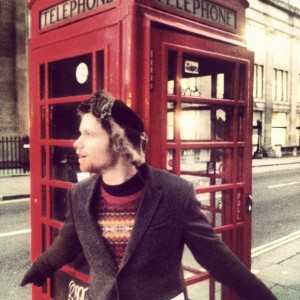 Although London proudly continues its staunchly traditional double decker busses, red telephone booths, Big Ben, Buckingham Palace, ect. ect., what impressed me most was its clean, modern feel. Even my hostel, which feels so large and corporate, is brightly and immaculately––if a bit cheesily––designed (posted rule plaques say, in a skinny handwriting-styled font: “Rule Number 1 is have fun!” The same font adorns hallways where token Britishisms mixed with American slang are stenciled on the bright blue walls. My personal favorite says: “You only live once. Live like Bond!”). The hostel harnesses an immediately appealing mixture of bright colors, light brown softwood,and sleek chrome, coming off like the Ikea or Whole Foods of hostels: large, impersonal and imposing yet impressively sleek nonetheless. 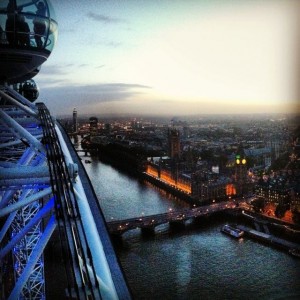 This modern-and-clean-yet-bright-and-welcoming feel carries over into restaurants, the National Theatre, The Tate Modern, The London Eye… ect. ect. Even crowded pubs feel clean and welcoming and smoking has been outlawed in all of them. London is an immaculate aesthetic combination of old and new, lacking the imposing vacuity of high modernism (and postmodernism, one could argue) and the red brick formality and conformity of classically industrialized cities. It has overcome architectural and aesthetic hurdles with class and brilliance, existing as a wonderful model of what a modern, multicultural, pluralistic city should look like… in all areas except expense. I am grateful to not live in London simply because of how quickly the city would drain my finances. I do note that expensiveness probably helps explain how the city can afford such aesthetic impressiveness; the two usually go hand in hand.

Some highlights from London: first, seeing my friend Laura and meeting her friends from Furman University. Something reinforced by this trip is how appealing it can be to see old friends in new contexts. Although I’ve known Laura for a couple years, I mostly know her from the context of Laity Lodge Youth Camp, a hermetically sealed community and cultural atmosphere. And in my experience, one of the best things about camp friendships is not engaging them at camp, but precipitating, deepening and enriching them within the contexts of the world at large.

Laura is involved in a very unique program through Furman, one where she gets to see a variety of plays and write about them. She was kind enough to get me a ticket for the play her group saw on Wednesday night, “nut,” at the National Theater’s “Shed,” a small black box with a striking red exterior. It was a peculiar play, the kind where its characters continually argue in a circular fashion for its entire running time. Sometimes this sort of writing is a bit unnerving for me, feeling a bit forced, a billboard screaming “NATURALISM.” I’m not sure about you, but the people I talk to tend to actually communicate in conversations that move, even when they’re arguing. Some admittedly do result in deadlock, but this sort of insistent circularity often rings a bit false for me as a viewer. However, considering the subject of the play––a woman with a mental illness who consistently argues with herself (or at least people who are most likely mental manifestation of herself)––this sort of dialogue seemed fairly necessary.

And “nut” was structurally interesting, only subtly, carefully revealing how its first act character were fantastical manifestations. The point wasn’t the reveal, the sort of self-impressed “ta da” that revels in writerly vanity while exploiting mental illness. The whole play was firmly rooted in compassion and, the more I think about it, the more insightful it becomes. It deals with relational tensions, how all external struggles actually stem from internal struggles in response to others, and how we consistently find our own identity through external comparison (“She’s/I’m not like you” are consistent refrains that most characters say in the show, anthems of internal isolation and longing for stable forms of self-definition”). Although little in the show is concrete, none of it was too abstract and, particularly through its wonderfully subtle, symbolic staging (various giant metal beams are imposingly fused, crisscrossing and jutting out forebodingly above characters, precariously and uncomfortably appearing to push down on them throughout the projection), the show is ultimately poetic and even a bit heartbreaking. The more I think about it the more I like it, and I’m sure if I were to see it again I would appreciate it even more.

(If you’re going to London and want a bit of avant-garde theatre instead of the typical big name shows, you can buy tickets here. It’s playing through December 5.)