From the back cover: 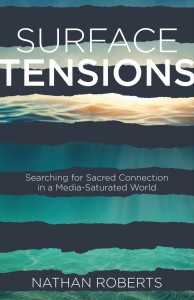 For some, our media-saturated culture points to the decline of Western civilization; for others, it points to the dawn of a bright future. For Nathan Roberts, the mediated landscape is a place to thoughtfully engage with these tensions. This unique memoir, meditative and philosophical, chronicles Nathan’s absorption in the vital, inspiring, and often maddening power of media and entertainment. With wry self-effacement and raw honesty, he calls us to conceive of media not only as an abstract, postmodern phenomenon, but as a digital architecture that creates real meeting space. Exploring social media, music, film, art, theater, standup comedy, and more, Nathan shows us a world of entertainment that reflects the universal hunger for connection.

“Screens are flattening life. Not so Nathan Roberts’s, where the forces of love and God at times collide with the barriers of media, but more often break through and make for a painfully honest and profoundly moving memoir.”
—Albert Borgmann, Regents Professor Emeritus of Philosophy at the University of Montana, author of Technology and the Character of Contemporary Life and  Real American Ethics

“I’ve known Nate since he started his undergraduate work at NYU, and I always knew he was a smart, thoughtful guy. He read books and philosophy and stared at a lot of screens, studying movies. But I didn’t realize the half of it. And I was delighted to encounter him on the pages of this book. Surface Tensions is a wonderfully allusive name for what works equally well as a small primer on media and a memoir of growing up in a thoroughly mediated age.”
—From the Foreword by Alissa Wilkinson, Staff Film Writer, Vox.com

“Reading Surface Tensions, I was surprised at how deeply I identified with Nathan and his beautifully articulated struggle: to connect in an increasingly anonymous world, to cope with absence and presence, to care, to take the chance to be known, to wrestle with the question that all of us are asking: do I matter?”
—Ashley Cleveland, Grammy Award-winning recording artist and author of Little Black Sheep

“Nathan Roberts is a gifted docent and tutor, offering a faith-affirming, literate, humorous, vulnerable, and thought-provoking perspective on our mediated lives—and lives of faith. Drawing on a wide range of voices from Kierkegaard to Veggie Tales, Christian Wiman to Instagram, Paul Tillich to Sunday school flannelgraphs, this is a book that will be read and discussed in both classes and coffee shops—I highly recommend it.”
—Tod Bolsinger, Vice President for Vocation and Formation, Fuller Theological Seminary; author of Canoeing the Mountains: Christian Leadership in Uncharted Territory

“Nathan Roberts has a rare gift, and I am looking forward to reading more from him for years to come. It is his instincts that most intrigue me. Able to read the world with uncanny ability, he is also embedded in the hope that the Christian vision gives him eyes to see the reality of his mediated existence in the pilgrimage that will be the rest of life.”
—Steven Garber, The Washington Institute for Faith, Vocation & Culture, and author of Visions of Vocation: Common Grace for the Common Good.

“The rapid pace of technological change makes it very difficult to construct a systematic accounting of technology. And this is why we need detailed, personal accounts of how technology comes to shape a person’s life, relationships, and understanding of the world. Nathan offers us just such an account, one that will likely resonate with those in his own generation and offer a unique window in for those of other generations.”
—John Dyer, Executive Director of Communications and Educational Technology, Dallas Theological Seminary