In this series, “Surface Questions,” I will address questions related to my forthcoming memoir about media, SURFACE TENSIONS, which will be released on July 1st. To submit a question, email me at nathanroberts@g.harvard.edu; I will draw the name of one question-submitter, who will  then receive a free copy of the book.

(Continued from Part 3) The cornerstone quote shows up halfway through The Situation and The Story, squeezed right between Gornick’s discussions of essay and memoir. It brings it all into focus.

She’s finishing a mediation on “Her and I” by Natalia Ginzburg. “‘Her and I’,” Gornick writes, “is an essay rather than a memoir because the writer is using her persona to explore a subject other than herself: in this case, marriage. If it had been a memoir, the focus would have been reversed. Ginzburg would have been using marriage precisely to explore – illuminate, define – herself. That would have been her intention. Her simple intension, I might add.”

As I read this paragraph on a Manhattan-bound R Train, my heart sunk a little. Ok. Got it. But then Gornick mentions a peculiar exception, one coincidentally – or not so coincidently – written by a pastor’s kid. An exception by a pastor’s kid wrestling with his past, with his church experience, with an unfair and upended world:

“A perfect bridge between the essay and the memoir is James Baldwin’s ‘Notes of a Native Son,’ a piece in which the writer takes a deep breath, inhaling the experience of himself in the world, then expels it through a viewpoint of such complex intentionality that the intersection between the self and the world becomes one of nearly perfect equality: neither being served at the expense of the other so that at one and the same time a subject is explored and self-definition is pursued.”

This hit me like a bolt of lightning. I knew “Notes of A Native Son” pretty well, and I knew that it would take the ego of king to presume that I could write anything nearly as spectacular. But I nevertheless realized, on that R train, that this was the sort of text I needed to write: a deep intake of my self-experience in the world and an exhalation so intentional that the text could form a permeable membrane, a permeable medium, between meditations on my developing self and thoughts about the media-saturated world in which it developed.

It couldn’t be a text in which I merely used the media-saturated world for end of self-exploration. Nor could it be a text in which I used my self for the sake of illuminating the world. It needed to be a perfectly equal intersection: world and self, ideas and experiences, theories and lived realities needed to be so inseparably intertwined, so deeply interconnected, that one would leave the book with both a greater understanding of our mediated world and an intimate knowledge of my own coming-of-age story. These elements needed to be in constant conversation, mutually illuminating and benefiting each other as woven through my linguistic loom.  The book needed to be a bridge between memoir and essay.

I’ll let you decide whether I actually succeeded in this lofty ambition. I will say that it was a riskier one than I anticipated; I wouldn’t necessarily recommend it. With any step out of equilibrium between self and world, the whole text threatens to unravel. If the seesaw leans too far in the direction of my self-development, at the expense of the media-saturated world, then it’s just a memoir with a lot of dopey philosophical theoretical essayistic digressions thrown in – wastes of space at the expense of the meat of the matter. If the seesaw leans too far in the direction of ideas about the world, then it can hardly count as a memoir. It becomes either an essay or a textbook with a number of weirdly personal anecdotes wasting space. I now understand why essay and memoir are kept separate so often: the sort of “complex intentionality” that Gornick speaks of is damn hard to muster.

Yet I’ve been relieved by couple responses. I visited the Hendrickson Publishers office about a month ago to film promotional video material. The marketing coordinator asked if I’d describe a memorable story from the book. These stories exist, of course, but Carl and I sat for some time, trying to think of a good little story to extract from the fabric of the text, stumped. “The stories are just so utterly tied to the ideas and analysis and everything else,” Carl eventually said, “that it’s hard to just pull one out.”

I recently asked a beta-reader what she thought of a story that I had added pretty late in the the revision process. Did it add something significant? “Truthfully, I couldn’t imagine this book without every little piece included,” she said.

And then in her foreword, Alissa Wilkinson writes that Surface Tensions “works equally well as a small primer on media and a memoir of growing up in a thoroughly mediated age.” Works equally well. Phew.

This was a long answer to a fairly simple question, I know. But this was a far from simple book to write. Yet if you come out of it thinking and feeling in equal measure, if, while reading, you feel like you’re “having a long, deep, close conversation with a friend” – a conversation about my personal life and the media-saturated world in which we both live – then it was more than worth the effort.

In this series, “Surface Questions,” I will address questions related to my forthcoming memoir about media, SURFACE TENSIONS, which will be released on July 1st. To submit a question, email me at nathanroberts@g.harvard.edu; I will draw the name of one question-submitter, who will  then receive a free copy of the book.

(Continued From Part 1.) One of my favorite forms of writing is the essay. The essay can get a bad rep because it’s associated with those dreaded things your high school teacher made you write. But that’s a shame. Those are poor, pathetic bastardizations of the essay. The essay, as Vinson Cunningham recently observed in The New Yorker, stems from the sermon. (My dad is a pastor – make the connection yourself.) The essay draws on experience and intellect, thoughts and feelings, narratives and theories. It’s both argumentative and personal, as academic as you want and as intimate as you desire. It draws on prior texts and marshals them for new purposes, situates them in the context of lived experience. It throws a bunch of different elements in a pot and stirs them until readers end up with an unusual, unpredictable stew that helps them taste the world in a new way.

It does this by tracing the thought path of an idiosyncratic, individual mind. If you can see the writer’s mind working on the page, in all of its messy glory, then you’re really reading an essay. One of my favorite things about the essay is its implicit belief that the life of the mind cannot – indeed, should not – separate itself from the rest of life. To split both parts of a person is to end up with an insufficient version of that person. We don’t just think through concepts and we don’t just feel our way through everything around us. We don’t just form opinions and theorize about the world; we live in the world while we think about it.

The memoir, as I imagined it, focused only on lived experience. Carl, my editor-to-be, was quick to point out that this wasn’t always the case. He mentioned Real Sex by Lauren Winner, a book in which Winner thought about sex and then talked to people who made her think new things about sex and then thought about it some more and then talked to more people. I recalled two conceptually-dependent memoirs, The Year of Living Biblically and The Night of the Gun, and I realized that the memoir could be bent in unique directions.

Therefore, feeling experimental, I teased out a possibility that had been swimming around in my mind at some low, deep level: I had read so many strident, idea-driven pieces about the internet and social media, but I had never read any personal pieces about life lived around and through social media. I hadn’t seen the sort of complexity and nuance that I lived through every day shine on the page. I felt like it was missing from public discourse. (This was before Master of None and the TED Radio Hour’s Screen Time, by the way.) Enough with the total naysayers. Enough with the bright and baby-faced Zuckerbergians babbling ebulliently. We needed more… and perhaps I could bring more to the table. That was exciting. 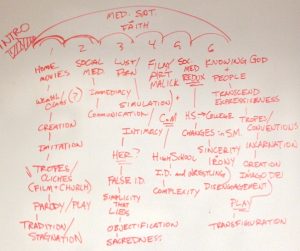 Ye Old Whiteboard. Some of these were crucial. Many were trashed.

As Carl and I brainstormed on Hendrickson’s whiteboard[1], this idea expanded into something more fully formed and flexible: I would think about media in a more general way, about drawing, painting, film, videocassettes, music, and so on. I would situate social media within the broader range of mediums with which I’ve spent my whole life engaged. And I would think about how these mediums helped form my emerging selfhood and shape my relationships with others.

We wrote a basic template for the memoir on that not-too-cold October day.[2] As I sat in a cracked leather seat on the commuter train back to Boston, I was pleased by a couple crucial things: (1) Carl and I seemed like we would get along splendidly. He didn’t want to cram me into some pre-made niche in the “Christian Book marketplace.” He seemed to really get my voice. We agreed that I should deliver something “in between Donald Miller and David Foster Wallace.” I could do that, I thought. I’m nowhere near as brilliant as David Foster Wallace, of course, but I’m more academically oriented than Donald Miller. (2) I could treat the project like a series of essays, strung together by personal anecdotes. I had experience in cultural studies, in theories of the image, in film. Even if my life wasn’t that exciting or moving, the ideas could stand on their own two feet. My life would form a mere structural framework for the ideas. It didn’t have to be a memoir by any traditional standards. I knew, then, that this book could be okay.

That was before I realized that this strategy would not, in fact, be that okay after all.

To be continued tomorrow…

[1] I know, by the way, that this is not how books are usually conceived––but I’d highly recommend this sort of proess. The occasional genius can whip out something phenomenal by her own, lonely self. But most of us could benefit from smart sounding boards like Carl, and I am extremely thankful that I had him.

[2] It’s funny to look at a picture of that whiteboard now: some ideas were totally dropped – several I don’t even remember – and some were are crucial in the final manuscript, but all were morphed into something deeper and richer than anything we could’ve imagined on that day.