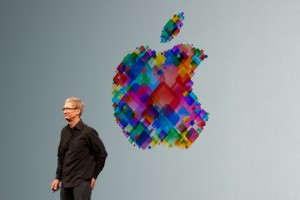 On June 2nd, Apple hosted its annual Worldwide Developers Conference Keynote address. This event is always preceded by a steady accumulation of prognosticating articles (if you’re any sort of techie, you know how they go: “4 New Reveals Expected from Apple at WWDC!”), followed by a wave of New Tech Fever (“12 Biggest Life-Changing WWDC Surprises!”). This keynote has hosted some of Apple’s largest product announcements over the last ten years. They were usually announced during Steve Jobs’ signature “One More Thing…” segments: the Power Mac, Mac Pro, iPhone 3G, iPhone 4, and so on. What would be next?

It’s hard for the media––always willing to latch onto hype––to mask its disappointment when news is lacking. This year’s WWDC was no exception. You can feel a collective sense of expectation slowly waning. “Apple Plays Catch-Up With Competitors,” announced NBC; “iOS 8 Was Unveiled Today, Does Android Have Anything to Be Envious Of?”; “Apple’s Maps Are Still Lost.” These weren’t the ecstatic, drooling responses of WWDCs gone by. Nothing shocked us. Nothing seemed to change the world.

The days of Jobs are over.

Steve Jobs was a towering example of brilliant leadership. When he took the stage at WWDC, he was a dynamic, creative-meets-technophile rock star. He was the ultimate Apple televangelist. Jobs had non-developers, like myself, tuning in to 90-minute developer conference keynotes and kept them there with the electricity of his pure, enthusiastic showmanship. After he died, this was one of the first things my dad and I mentioned: “He was just so excited to share his products. He loved his work.”

And he did love it, surely. But these sorts of post-mortem accolades were somewhat curtailed after the release of Jobs’ highly anticipated biography. Carefully researched by Walter Isaacson, it revealed a side of Jobs that (although bits and pieces had been gossiped around Silicon Valley for decades) never really figured into his public image. You’ve probably heard about them by now. Jobs could be short or cruel to his coworkers; he’d build you up to gain your support, but tear you down if he perceived your work to be inadequate. He had unrealistic expectations, but he was uncompromisingly stubborn (a term for this even has its own Wikipedia page: Jobs’s “Reality Distortion Field”). Designers were working because they wanted to please Steve. His pleasure was a high, his displeasure like the harshest withdrawals.

I have a hard time knowing how to react to this. Selfishly, I miss the days of the Old Apple Razzle-Dazzle. I liked seeing new, creative inventions shimmer at every WWDC. I liked Steve’s bravado; the “Reality Distortion Field” completely reshaped reality. But at the same time, I wonder if a less-productive Apple is a happier, healthier Apple. I hope that the employees are treated with more respect. If they are, if they no longer find themselvess in a Cult of Personality, isn’t that development worth a world with less Jobsian technology?

I have no idea what’s actually going on inside the Cupertino offices, but I do like what I see. This Macworld article is particularly revealing. WWDC 2014 wasn’t about us, the common consumers. It wasn’t about wowing us with the Next Big Hardware Thing. It was for developers. As far as they were concerned, it was “a big, exuberant, sloppy love letter from Apple.” This article makes it apparent that what seemed like an anti-climactic show was, actually, a show tailored for the needs and concerns of developers. It concludes: “every step the company takes in this direction can only make developers happier and more productive—and for each and every one of us, that means that the apps we use every day will simply get better and better.”

In the old days of the WWDC keynote, it was all about Apple and all about Steve. This year, it seemed to be about developers, which, for a developer’s conference, seems just about right. CEO Tim Cook shared the stage with many other leaders. He’s not trying to become some sort of “Surrogate Jobs.” He seems to be trying out a totally different style of interpersonal leadership. Ironically, in doing this, he seems to be taking Jobs’ own maxim to heart.