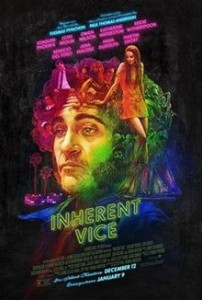 Plot is the best and worst part of cinema, and Paul Thomas Anderson knows it. On one hand, plot is unavoidable––if, by plot, we mean intentional progression from one image to another. And since celluloid (real, beautiful celluloid in PTA’s case) unspools image after image, it keeps charging onward. Some genres are particularly dependent on the velocity and direction of their charge; mysteries, for instance, are hopelessly dependent on their logical, Rube Goldbergian momentum. We’re all foremen when it comes to mysteries: pulled in to dissect and judge the quality of the motors, gears, and sprockets whirring us through time.

But, on the other hand, what could be more antithetical to the visceral, sensual joy of cinema than the manmade shackle of narrative logic? Plots can carve up the unruly, the sensual, the natural into cubits and acres. They strip mine them with utilitarian haste. Scene 4 must get X from Location B to Location C, because Y waits there with crucial info. Sometimes, mystery plots are so preoccupied with how their progressions must unfold that they’re unconcerned with what simply is. They can leave us with handcrafted resolutions and disposable experiences.

This is why Inherent Vice is so damn great. PTA turns the mystery on its head: we’re left with very few answers and a phenomenal experience. He’s performed a magic trick, overloading this film with the best that plot can offer––the whirring, cackling mechanics, via Thomas Pynchon––for the sake of cultivating the wild, the wacky, the untamable. The true pleasure of the Rube Goldberg machine, Anderson knows, has nothing to do with utility. It’s all in the whiz-bang cause-effect razzle-dazzle. PTA’s mechanics spin and spin until they blossom into something wild and weird and awesome.

Premise: it’s 1970. The Age of Aquarius has come and gone in Gordita Beach, California, and the good vibrations have started shaking things up a little too much for stoner detective Larry “Doc” Sportello (Joaquin Phoenix). When Doc’s ex-old-lady, Shasta Fay Hepworth, asks him to examine the disappearance of her gangster boyfriend, Mickey Wolfmann, Doc is drawn into a web of postmodern intrigue: real estate tycoons, Asian hookers, Aryan biker gangs, Black Panthers, straight-laced-cops-turned-part-time-TV-actors, marine lawyers, runaway teenagers, blacklisted actors, two-timing “antigovernment revolutionaries,” megacorporate drug-pushing dentists, they’re all running (and tanning and sexing and coke snorting) around this full-baked SoCal mélange. The deeper Doc dives into this knotty rhizome, the more characters we meet, the more thematic connections arise, the fewer things make sense. Doc scribbles important points onto his notepad, like: “Hallucinating?,” “Definitely not hallucinating,” and “Something Spanish.” Critics may be tempted to do the same. While Inherent Vice might melt a positivist’s mind, feebler noggins like mine might as well chill and take in the ganja for what it’s worth.

And it’s worth a surprising lot. There’s a deep logic at play here: this is a high film about a high time. Doc would probably wax meditative like Joan Didion (“The center was not holding. It was a country of bankruptcy notices and public-auction announcements and commonplace reports of casual killings and misplaced children…”) if he weren’t so blazed. Phoenix has received little buzz for this loose, mutton chopped performance––none of the raves he got for his manic, apish histrionics in The Master––and that’s too bad. He’s a pro purveyor of loopy, low-key comedy. It’s all in the reaction shots: the dropped jowl, the indignant, furrowed brow, the muddled noirspeak, the faux-I’m-totally-tracking-with-yah “mmmhm” response, the disapproving tongue click and head nod.

But as PTA carries us into an elegiac dénouement we realize how deeply we feel for our decentered, denim-clad, sunglassed hombre. Like all PTA films, Inherent Vice’s formal razzmatazz is marshaled to illuminate primal longings––in this case, we’re drawn to the wishful mirage of companionship in an ever-fracturing world.

Doc channels this longing into imagined romance and bromance. Inherent Vice is equally anchored by Doc’s feelings for Shasta Fay and Lt. Det. Christian “Bigfoot” Bjornson. Josh Brolin has, fortunately, received well-deserved acclaim for this (sometimes literal) scenery chewing, wannabe straight-laced/bad-boy cop. (Cops always want to have it both ways––a tension that writhes at the heart of this dead-eyed, sharp-jawed buffoon.) Geoffrey O’Brien likened Bigfoot’s flattop haircut to a granite mesa, and he’s right on the money. Bigfoot could have sprung from the rich red earth itself or come straight outta John Wayne’s big fat cock, ready to take the West with that “evil, little shit-twinkle in his eye that says Civil Rights Violations.” And yet, when Bigfoot and Doc eye each other warily––Doc’s eyes squinting, Bigfoot’s piercing––forced into unwitting cahoots, we sense The Master’s Freddy Quell/Lancaster Dodd dynamic in a lesser key: beneath the sturdy façade of mid-20th-century American essentialism, both guys just kinda wanna be each other. PTA makes this desire hilariously, movingly literal in the aforementioned scenery-chewing scene, which begins when Bigfoot not only kicks down Doc’s door, but crushes its glass panes with decisive, vertical, Godzilla-like stomps.

I won’t describe the actual scenery chewed for the sake of preserving the punch line. It’s the kind of surreal, visual gag that leaves you wide-eyed, gasping and laughing at the same time. Inherent Vice is the kind of movie that makes you want to leave punch lines unsoiled for first-time viewers. And so I suppose I should end by saying that among its other qualities, Inherent Vice is, in its purest, most visceral element, one of the best visual comedies I’ve ever seen. Pynchon lays the loco-logical groundwork and then PTA, master of the mise-en-scène, carries in the wonky furniture. Nearly every shot is bursts with explosive visual verve. The mathematical mystery-lover may frown here and there as the equation stops adding up, but she may be just too doubled over to care. It’s certainly the best bad trip I’ve ever been on, and I mean that in the grooviest way possible.