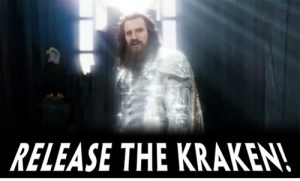 *not what is actually being released

I am going to interrupt my “Surface Questions” series – which, by the way, could use some more questions, if you’re at all interested in receiving a free copy of Surface Tensions (read the gist in previous posts) – due to a surprise. Namely, at least some distributors (Amazon seems to be out of stock) are releasing Surface Tensions today. If you preordered the thing, it’s either at or on its way to your doorstep right now. I’ll still do the question draw on July 1st, but I’d like to switch gears on this Big Deal Day (BDD, for short).

I’m excited to release this book into the world. I’ve worked harder on Surface Tensions than anything else. I’ve devoted my heart, soul, mind, strength, anxiety, frustration, perfectionisty issues, all that stuff to it. I’ve spent many hours on individual sentences. I’ve edited and edited. I’ve by turns delighted and despaired over it. For an entire summer, it took over my heart and mind like a crazy intractable virus. All of that led to today and to the upcoming months.

I recently listened to Louis C.K. talk about the process of working on his most recent show, Horace and Pete; I’ve heard him breathlessly ramble on about it for a full 90 minutes on WTF. Listening to C.K., I felt an acute sense that, for one who hasn’t worked on a creative project of that sort of scale, effort, heart, and intensity, he must sound like a bit of a loon, maybe even a bit of a narcissist: self-obsessed through creative obsession. (This is why you can sense many creative people squirm when they’re asked about their own projects; they feel the tug of narcissism and shun it.) But I also understood C.K.’s bubbly, breathless intensity: it’s kind of crazy to work on a project of massive, life-changing proportions in secret for many months before sending it out into the world. It’s only sensible to want to ramble on about it. (This blog has been my form of rambling.)

Unfortunately, the press declared that C.K.’s project was a failure. I hope that doesn’t happen with Surface Tensions, but I also acutely understand that, even though I’ve put a lot of effort into the book, that doesn’t mean that it’s automatically great. I get this oh-too-well. I’ve felt the spectre of non-greatness loom throughout the entire creative process. When I started working on what became Surface Tensions, my goal was to simply write a book that wasn’t bad. There were days of badness. I felt them and I took them hard; I sent my editor frazzled emails, full of ideas for editing and further drafts and badness-fixing.

But something happened at some transformative point; I can’t even tell you when, exactly. It was probably less one point than a slow transformation over time. All I can say was that at some moment(s) in time, I stopped feeling bad and started feeling happy about the book. I  felt that Surface Tensions was the book that it needed to be: it took on its own life to the extent that major edits felt somehow disloyal, disfiguring, wrong. And then I felt peace. I’m sure it still has some issues, of course. But I feel in my gut that it reached a point – a  pivot point that perhaps a lot of art reaches? – when complaints and dislikes will have as much to do with personal preference as with the work itself. It’s what it needs to be, and that’s kind of beautiful.[1]

So I hope you dig it. I have a couple (helpful, I hope) reading tips:

Finally, if you like the book, please tell your friends about it. Please share it. I’m not doing this to make money; I don’t have to worry about finances, fortunately. I merely believe in my heart of hearts that this book can help us bond together in loving unity, that it can help us use media to pull ourselves out of ourselves for the sake of interrelationship. I believe that it can help us think about media in ways that will make the world a legitimately better place.

And I can only do this through you. I once believed, as you might, that publishing a book implies instant cultural credence and popularity, instant opportunity for fame and success. The truth is, there are a lot of books out there, a lot that aren’t good at all, and a lot that go out of print very quickly. My publisher is wonderful, but it doesn’t publish Malcolm Gladwell or Rick Warren: the sort of writers that gain major book tours and rocket themselves to the top of bestseller lists.

This book will only be as successful as you make it. If you read Surface Tensions and enjoy it, if it moves you, if it makes you laugh and think, please tell your friends. Please tweet about it. Please Instagram about it. Please Facebook about it. Use media to allow it to help us grow together in what Stanley Cavell calls the “whirl of organism.”

I can’t wait to hear your thoughts.

[1] I don’t say “it is what it needs to be” as a way to defensively deny its issues, although there were definitely points in the process when I did that as a way to squirm and avoid important edits. There’s a district difference, I’ve found, between saying “don’t challenge the art, bro!” as a way to remain stubbornly ignorant of error, and to acknowledge a legitimate state of peace felt toward a work that’s been thoroughly tinkered with and challenged and worked through.