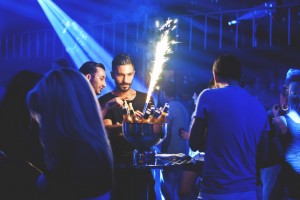 The man is a “club scene legend,” my roommate tells me. He’s a real-life Batman: a mysterious, wealthy benefactor. You’ll be minding your own business at an exclusive nightclub when––surprise!––he swoops onto the scene, showering you with charitable gifts.

YouTube clips show this charity in action. They depict the sorts of scenes that inspire rappers to wax poetic. Hundreds of champagne bottles are carried into a darkened club, radiant sparklers rubber-banded to their necks. The shimmering display screams as loudly as the clip’s title: “A 190K Night!”

I turn away from the video, staring at my roommate, wide-eyed: “You mean this mysterious guy bought one-hundred and ninety-thousand dollars worth of champagne in one night… all at once?”

He shrugs. “Yeah, that’s just what some people like to do.”

My stomach turns over. One hundred and ninety thousand dollars funneled into a brief night’s shallow pleasures, thumping away in the next day’s hangovers. My mind flips through a variety of social justice clichés: pouting, bony children; large families crammed into rickety favelas; the group of men huddled under donated blankets in front of my apartment. How much more could these people use this man’s charity? What could they have gotten with 190K?

Videos like these make me a little ashamed to call myself a Manhattanite. Many New Yorkers have the resources to radically change the world, but use them to bolster their own cultural capital instead. Of course, I can’t totally blame my neighbors. I, too, have learned how frighteningly easy it is to spend a lot of money in a single night. And as a scholarship-dependent, good-food-and-drink-loving college student, I’m no paragon of philanthropy either.

Still, it’s hard to live in a culture that could spark so much social justice but seems so reticent to do so. 190K nights may keep the economy rolling, but they won’t help the orphans, the widows, the “least of these.”

Generally, I just let these issues depress me. I unconsciously assume that the days of Zacchaeus are long past. But, in my better moments, I remember the story of someone who was once a NYU student like me: Scott Harrison. Scott was once a major club promoter. At the height of his career, Budweiser would pay him two thousand dollars to drink its beer in public––per night!

Then, at age 28, it hit him. As he put it: “I realized I was the worst person I knew. I was emotionally bankrupt. I was spiritually bankrupt, morally bankrupt…” So he began reading theology and asked himself: What if I actually served others? What would the exact opposite of my life look like?

Scott founded charity:water, an organization created to bring clean water into every area in the world. Since 2006, charity:water has funded 11,771 water projects and provided clean drinking water for over four million people.

What’s striking about Scott is that he isn’t just an example of a “life turned around.” He’s an example of how radical, selfish extravagance paved the way for radical, selfless commitment to social justice. Like Paul, his life is an example of how God works through opposing extremes–transforming hate into love, utter selfishness into selflessness. Would Scott have created such a radically charitable company if he hadn’t lived such a radically uncharitable lifestyle first? I’m not sure. Maybe not.

Scott reminds me how I shouldn’t just be depressed by 190K nights. Instead, I should imagine what these benefactors will look like when their lives are transformed by God. I should remind myself what Tim Keller says about God’s redemption: “Everything sad is going to come untrue and it will somehow be greater for having once been broken and lost.”

Some careers may not seem social justice oriented at all. They may seem hedonistic and wasteful. But we shouldn’t grow cynical. We have a just and merciful God who wants to take the worst of human nature and make it far better than we can imagine.